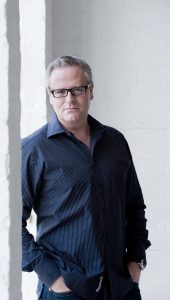 In summer 2009, Ivor appeared in the BBC TV series Classic Goldie, for which he mentored drum ‘n’ bass musician Goldie in fulfilling a commission by the BBC to write a short composition on the theme of evolution. The work was performed at the BBC Proms on 1 & 2 August 2009.

This project followed on from the 2008 BBC TV series Maestro, for which Ivor was Goldie’s conducting mentor.

Ivor also appeared in his own TV documentary series on Channel Five in 2006, The Singing Estate, which was nominated for a Rose d’Or award.

Ivor has conducted the New London Singers since 1989. He comes from a musical family in St Albans, played the violin from a young age and enjoyed a distinguished career as a solo boy treble at St Alban’s Cathedral. He graduated in music from York University and was subsequently awarded scholarships to study singing and conducting at both the Royal Academy and the Royal College of Music under the tutelage of Colin Metters and Sir Colin Davis. He assisted Gennadi Rozhdestvensky, conducting performances of Mussorgsky’s Sorochintsy Fair and Janácek’s Cunning Little Vixen. He represented Great Britain in broadcast masterclasses with Eric Ericson at the World Symposium of Choral Music in Stockholm and completed his studies in Siena with the great Russian pedagogue Ilya Musin, and Valery Gergiev.

Ivor has conducted a number of leading orchestras including the Royal Philharmonic Orchestra, the Royal Liverpool Philharmonic, the City of London Sinfonia, the London Mozart Players and the Hanover Band. He regularly performs at major London venues including the Royal Albert Hall, the South Bank, the Barbican and St Martin-in-the- Fields. He has also conducted at venues across Europe, most extensively throughout Italy and France.